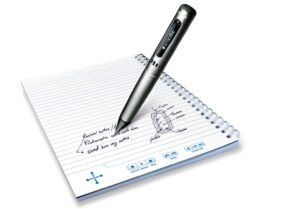 Jim Marggraff, CEO of Livescribe, shows us how it’s done, using an 8GB Echo smartpen. Yep, a pen that has memory: for storing sound, your written notes for upload, and apps you can launch just by tapping a line you’ve drawn on paper. “Anything you write, hear, or speak, the pen will capture and make it accessible to you forever, and let you search it and share it,” says Marggraff.

The pens can also be used to create “pencasts” which recreate the movements of the pen, as well as recording the accompanying audio. Some of the pencasts, which range from calculus lessons to cartoons, have been viewed more than 40,000 times.

There’s an app store on the Livescribe site, but even the included apps elicit wows: A piano you can draw and then play. A translator that will speak in Spanish (or Mandarin or Arabic) the word you’ve just written in English. A user interface you draw yourself. Livescribe is writing just the tip of the iceberg.

Tom Mueller Describes Merlin Engine
brought to you by Livescribe